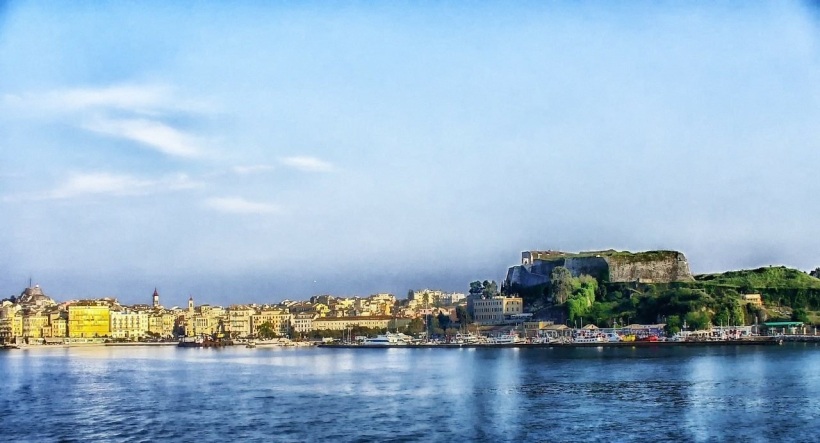 As the Northern Cape of AgiosSpyridonas approaches off the starboard bow of the Brindisi ferry, or far beneath the wings of your rapidly descending aircraft, something happens to the light; as if some celestial switch has been flipped, changing everything. You know you have left the rest of Europe behind and are now in Greece.
Corfu is one of Greece’s enchanted triangle of islands which stand sentinel to that country’s archipelago, the numbers of which can be measured in their thousands. It occupies that role on the north-west frontier, as Rhodes does to the east and Crete to the south. But the island is not large. It is not even the biggest in the Ionian chain, that distinction going to Kefalonia some 100 miles further south. But in stature it is a giant, punching way above its weight in terms of its attraction as a destination and its historical and cultural influence over modern Greece.
The creaking resonance of bass notes, the hawsers strain every sinew as the winches reel our ship landwards, lending an accompaniment as something new and vibrant opens up before us. Far astern lie the mannered ways and manicured vistas of Italy as we are drawn, inch-by-inch, ashore to the cheery confusion and careless landscapes that signal arrival at our port of entry into Greece.
It is of little surprise that the town of Kerkyra, like the island itself, is a gentle introduction to the Hellenic world, being the closest Greek landfall to a country that held sway here for so long. That the Venetians contributed their architecture, the French their cafés and the British their cricket and ginger beer is undoubtable, but if life on Corfu seems less chaotic than that on those islands further south and east, the dominant gene is still that of Greece.
As the sun rises on the sleepy capital, the light reaches a level of candescence that shines so keenly it divests everything of all but its essence. It is as if every day you open your eyes for the first time and the world is reborn.